It is April 28, 2018, a hot day in Nashville. I am wearing a floral sundress and a ton of eyeliner on my lids as I stand in line at The Cowan, a new venue tied to Topgolf Nashville. I tap my toes in excitement for one reason only: I’m about to see All Time Low perform an intimate acoustic set.

Flash forward a week later: It is May 6, 2018. I’m back in Atlanta for the annual Shaky Knees Festival and my outfit is just as bohemian as the week before (sans the eyeliner). I go to the festival with one of my great friends Andrew, who is stoked to see the band he’s loved since middle school. Luckily for me, we share the same devotion and are prepared to scream every lyric with reckless abandon. Who are we about to see? The answer is once again, All Time Low.

If you know me at all, you know that All Time Low has been my favorite band for years. I was first introduced to their music by a friend, who really brought me into the world of alternative rock and pop punk. The minute I opened that YouTube link of “Weightless,” I was hooked and began chanting Gaskarth’s clever lyrics wherever I could. I began trying to write songs that were inspired by theirs, typically failing to capture the wit and vivid imagery present on each track of Nothing Personal. Then again, I was 12 years old, looking at the four-piece with dreamy eyes with the wish that someday, I could do what they did.

You should also know that I never expected to work with Rian Dawson on my own music. A feeling of pure joy overcame my body when I heard the following words:

“You should come back to my studio so we can work on some of your own songs.”

I thought this sentence was a joke, a nicety that I never expected to hear from one of my influences. I asked him if he was serious, and his genuine response made me giddy for weeks. Months later, I booked my week of studio time with Rian (as well as Dan Swank, his amazingly talented right-hand man) and recorded my latest release, “Tinted Glasses.” That week was a turning point for me as an artist, and the support I received was mind-blowing. I still can’t wrap my head around this dream coming true.

So yes, I saw All Time Low perform twice in a week’s time. Two completely different venues in two different states, where they played two different sets. I made my way to the front row at both shows and am not ashamed to admit that I was the girl singing all of the harmonies to every song.

“Hey, are you a singer?” the brunette girl beside me at the Atlanta date asked me, smiling.

“Yeah, actually I am,” I responded, hoping that she wasn’t annoyed by my enthusiastic belting. Luckily, she nodded and gave me a big thumbs up before turning her head back to the stage.

As cheesy as this may sound, All Time Low is just one of those bands that I could go see live over and over again, and never get tired of. There are millions of bands on this planet trying to become household names all over the world, and yet a band that has been together for over a decade has continued to evolve and stay relevant in an industry that’s constantly changing.

The true question is; how do they continue playing music without it getting stale? How have they maintained their fan base, as well as the spark to continue moving forward?

First off, they are so much more than just a band. Their bond transcends the realm of music and would still be there if they all would have gone to college and found different careers. They are still that group of friends who wanted to play music for the fun of it, meeting at their parents’ houses to practice their favorite Blink-182 songs. They grew up together before realizing that their passion for music could become a steady job. They went through the same challenges in high school, the pressure to go to college, the concern of their families when they started touring. They stayed together through it all with the fire to continue doing what they love.

The art of All Time Low is each member’s genuine commitment to the project. It doesn’t matter whether they’re performing for 300 people at The Cowan, or over 2,000 people at Shaky Knees Festival.

The consistent energy and positivity in their performances is not about the numbers, their deal with Fueled By Ramen, or the 3,000,000+ monthly listeners on Spotify. Behind each number is a person who has been inspired by their artistry. To me, each stream is another memory of traveling with my best friends, singing at the top of my lungs with the guy I was into, or being broken-hearted and needing an escape. I want to see them perform as many times as I can because they constantly remind me that life is about doing what you love. We only have one chance, and there’s no point in settling for anything less than what we all dream about.

My rosy view of the world and the music industry definitely shows in this piece, and I cannot say that I am an objective writer of this subject. I also cannot say that All Time Low’s journey has been completely without its challenges, nor do I expect my career to be free from adversity. All I am trying to say is that these four guys from Baltimore, Maryland continue to put their hearts, souls, and guts into creating work that has brought people together just as they had experienced as teenagers playing covers in the basement. They’ve instilled in me the same desire to play my music to as many people that will listen, all with the intention of inspiring someone else.

“Forget everything that’s going on in the world,” Gaskarth shouts into the mic in Atlanta. “We’re all in this together.”

I know that this is true. 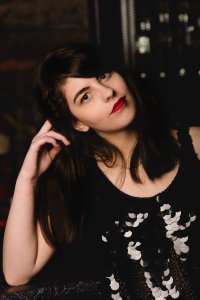