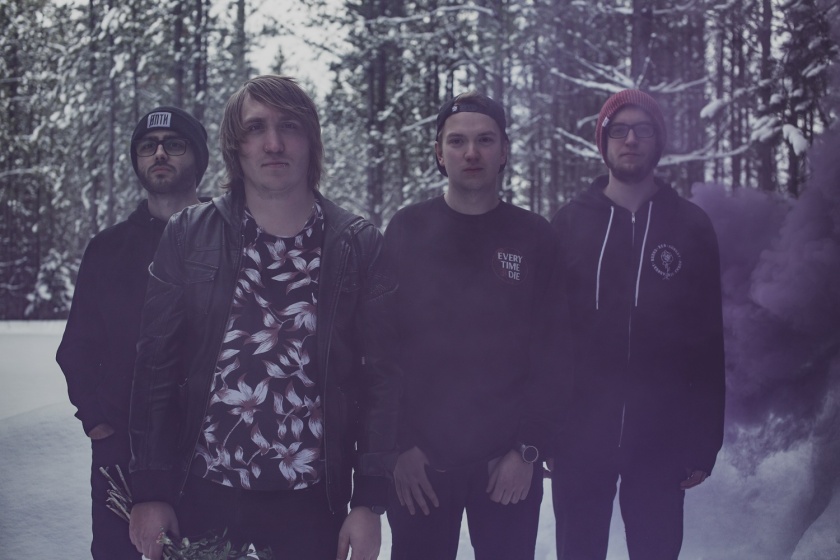 One of my favorite parts of being a member of the Spinning Thoughts team is the ability to discover new artists. Don’t get me wrong, I love sharing my passion for heavy music and still get geeked out every time I have the opportunity to spin an advance copy of one of my favorite artists.  But it is a totally different experience to have the ability to find new music I love and expand my horizons.

I was able to do just that this week, while checking out The Presence of Past Tense, the new EP from Canadian post-hardcore band, The Burden.  This EP is stacked — its 5 tracks run only 18 minutes but boast heavy, attention grabbing melodies.  Each song is unique and showcases the bands diversity. The lead single, “Moving Pictures”, is worthy of the current playlist on SiriusXM Octane. It is catchy and heavy at the same time and provides a strong open to the album.

My favorite track on the record is “A Search for Solace”. The Burden brings in guest vocals from Tyler Zanon that play out in a back and forth reminiscent of the Used. The fourth track, “Clouded”, is a very emotional, stripped down track that is so raw and full of feeling that it is sure to resonate on some level with anyone who gives it a listen. The final track, “A Call For Closure” culminates with a very heavy breakdown and exits the EP as heavily as it began.

I had the opportunity to get in touch with the band to find out more about what went into The Presence of Past Tense, how things have changed since their debut (2016s Modern Disease), and what the future holds for this up-and-coming band.

ST: The Presence of Past Tense is a huge evolution for the band after Modern Disease. It is every bit as heavy but has a much more polished and melodic sound. How was your approach different for this record?
TB: The biggest change from ‘Modern Disease’ was having a producer come in and lend his ears and expertise to us. ‘Modern Disease’ was us and only us, from writing to tracking in the studio. We basically took those songs from start to finish without any changes. We actually wrote most of these five EP songs right after ‘Modern Disease’ and they sounded like they were maybe b-sides to that album. But we sat on them for a while and then Jordan Chase (Secret & Whisper, Shreddy Kreuger), our producer, came into the pictures and we spent time in pre-production with him and reworked these songs into what they are now. Jordan challenged us to try new things and re-write or structure things in different ways than we normally would, and we trusted his experience and abilities. The end result is a much more mature sounding collection of songs.

ST: Do you all listen to a lot of metal when you aren’t writing? If so, who are your favorite artists right now? And if not, what are you jamming to for inspiration?
TB: We all listen to a huge variety of music. Some of us are more into metal and heavier genres than others, but generally we all enjoy a lot of the same things. We bond mostly over Post Hardcore for sure, but we love the idea of taking all sorts of influence from different genres into account when we’re writing. Our favorite thing to do in our offtime is share music with each other and really dig into the history of bands. And here’s some of the things we’ve individually been listening to recently.
Devin: Capstan, In Her Own Words, The Wonder Years, Seaway, and Underoath.
Rob: Post Malone, Every Time I Die, Caspian, Norma Jean, Knocked Loose.
Jake: Underoath, Bright Eyes, Lorde, My Chemical Romance, The Used.
Ross: Limbs, Norma Jean, The Naked and Famous, The Plot In You, Gideon, Movements.

ST: The thing that catches my attention about The Presence of Past Tense is it sounds every bit as polished as an album from one of the big studios (Roadrunner, Sumerian, etc.) but the band made that happen on its own. What was it like, the process that went into recording this EP?
TB: We really appreciate the compliments on how this EP sounds! It is a huge point of pride that were able to pull it off on our own, in our own jam space. It was stressful dealing with recording everything on our own without an engineer there with us. But in the end it forced us to learn a lot of new things and be resourceful. We all put a ton of time and work into learning how to record, and it is truly exhausting. That being said, we could not have pulled any of this off without our producer Jordan Chase and Paul Michalewicz, who mastered the EP. Without Jordan’s guidance, none of this would been possible. The biggest hurdle we had to jump was having to call Jordan every time we needed help, he lives 8 hours away from us, so there was a lot of over the phone guidance and tutorials!

ST: One of my favorite tracks on the EP is “Clouded”. It is so raw and emotional- what was the story behind this one?
Jake: Thank you! “Clouded” is a really emotional song for me, at its core it’s about self pity. The song documents the struggles of life. A lot of it has to deal with the masks we put on to deal with life when there’s always an internal battle going on. The strength we portray versus the fragility we feel. It was originally an acoustic song and I brought it to the band, I’m super excited on how it turned out. I actually tracked vocals alone for it in a very tall staircase in a church to add to the feeling of it all. Hope it resonates with the audience like it does with all of us.

ST: The album art on both The Presence of Past Tense and Modern Disease is out of this world. Your merch is really artistic too- who is the genius behind the artwork?
Ross: Thank you so much. I’m actually the one who handles most of our artwork. I designed the artwork for both Modern Disease for the EP, and I’ve handled most of our merch designs as well. I’m a graphic designer full-time for a local company, and I do freelance work as well. It’s actually sort of how I ended up joining the band. I had just moved to Prince George recently, and the guys had hit me up to do the artwork for Modern Disease. They were also looking for a new bass player and found out I was one and everything just sort of clicked with us; I really dug what they were writing and we all got along really well. 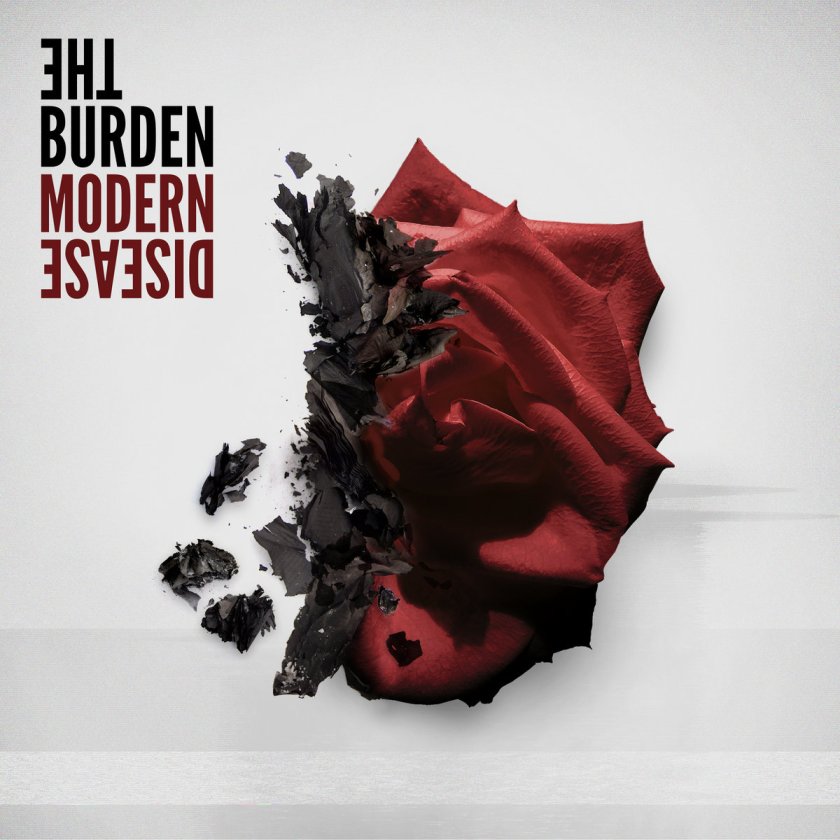 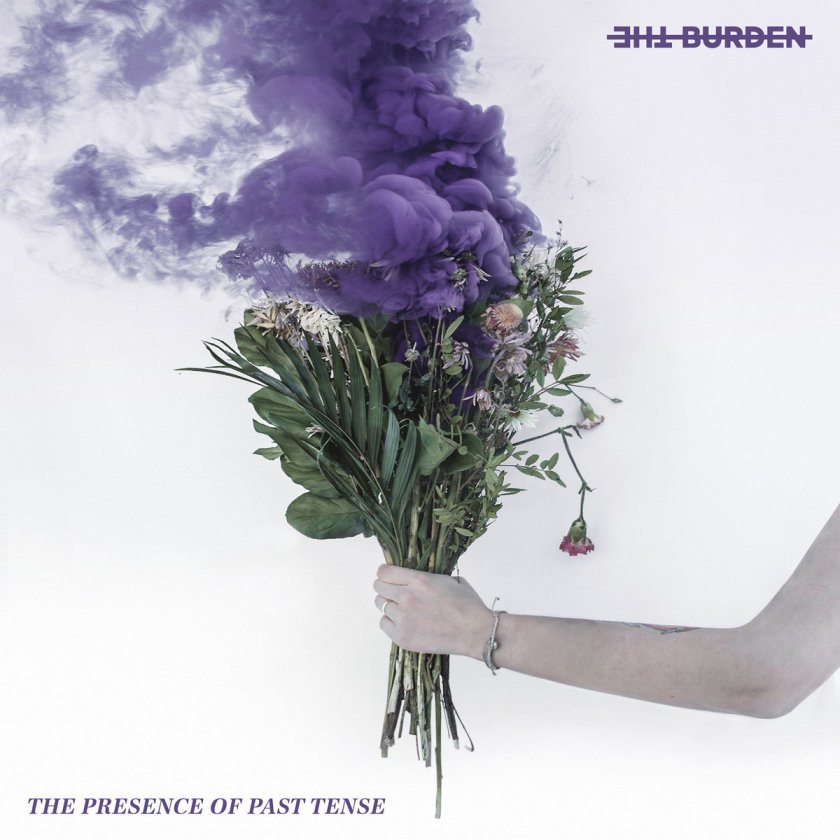 ST: What plans does the band have of touring to support the new EP?
TB: If people in the audience don’t know, The Burden is from western Canada. Touring is difficult because it is 8 hours from our small town of Prince George to Vancouver, Kelowna, Edmonton or Calgary. It is really hard as an independent band to do tours for an extended length of time in Canada because of the sheer distance between a lot of the larger cities.

That being said we are working on a few short tours upcoming this summer and fall in western Canada with some other exceptional bands from western Canada that we are good friends with. We are working on shows with Stasis, Kitsune, Living Machines, No Liars, Chief State and Hawking. Check those bands out if you have a chance, they are all incredibly talented.

ST: When you all aren’t rocking your faces off, what else are you getting into?
TB: We are all into fairly nerdy stuff. We all love playing video games. Ross and Jake play a lot of League of Legends, and Ross started playing Fortnite recently. Rob has been playing a lot of Far Cry 5. Jake loves retro/vintage gaming and collects a lot of that stuff. Devin watches a lot of anime. Jake and Ross both are really into collecting records on vinyl. Ross is into archery and target shooting. Rob loves cars, so he’s always buying, or selling, or fixing them. He also loves riding his motorcycle in the summer.

ST: I encourage our fans to like The Burden on Facebook, but, I wasn’t able to find any other socials! Did Donald Trump scare you away from Twitter? I promise all Americans aren’t like that!
TB: It’s embarrassing to admit but none of us in the band use personal twitter accounts and are scared to get into it, as none of us have any experience there! None of us are really huge social media fiends on a personal level, and so our social media presence outside of Facebook isn’t always the best. But we do have Twitter and Instagram profiles for the band, we just are working on learning to be more active and engaging with them.
https://twitter.com/theburdenband
https://www.instagram.com/theburdenband

ST: What final thoughts do you have for the Metal Thoughts audience about The Presence of Past Tense or The Burden?
TB: We are incredibly grateful to everyone that’s taken the time to listen to our music or come out to our shows. If you’ve listened to or bought our new EP, thank you so much. If you haven’t yet, you can stream it on Spotify, Apple Music, Google Play, etc. You can also can purchase a digital download from our Bandcamp page if you want to directly support us!

Make sure you check out The Presence of Past Tense and Modern Disease, both available now on your favorite music platform! 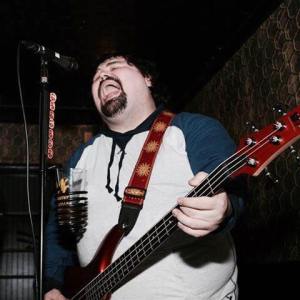