There seems to be no better way to sum up the style and fury of the new album, Graveyard Shift by Motionless in White than the refrain from their hit single Loud (Fuck It).

You gotta be crass, gotta be cold- it’s everything we know, turn it up TURN IT UP NOW.”

Motionless in White is very quickly becoming one of the strongest bands in the metalcore/goth metal scene.  The Scranton, Pennsylvania based band is no stranger to success on the rock charts, with their previous album Reincarnate reaching Number 1 on both the rock and metal charts (and as high as Number 9 on the Billboard 200).  But where Reincarnate put Motionless in White on the map, Graveyard Shift is on pace to make them a household name.

Motionless in White is known for their dark and goth metalcore sounds.  Their sound finds a way to honor the bands influences, such as Marilyn Manson, Rob Zombie, KoRN, and AFI, while being altogether unique and heavy.  The band brings a very melodic, yet dark, tone that is reminiscent of Brand New — only a hell of a lot heavier.  One of my favorite elements of the bands’ music, is the frequently (and expertly) used chanting and eerie group vocals that made them recognizable with A-M-E-R-I-C-A from the Infamous album and is made evident on Graveyard Shift in the conclusion of the second single, Eternally Yours.

Graveyard Shift marks a transitional point for the band.  It is their first album released on Roadrunner Records and marks the departure of the band from Fearless Records.  This summer, Motionless in White is on the road in support of fellow Roadrunner Records act, In This Moment.  This is not the first connection between the two, as frontman Chris “Motionless” Cerulli appeared in the music video for the bands hit single Whore.

Though the album has only been out for a few weeks, the band has already released 4 singles from the album.  570, the first single, was released almost a year ago in promotion of the upcoming album.  The second single on the album is my personal favorite song on the album, Eternally Yours.  The records biggest success to date came from my LOUD (Fuck It), which peaked at Number 18 on the Mainstream Rock chart.  The album is incredibly balanced and heavy and also features the latest single, Rats, as well as what I can only assume will be the next single, Necessary Evil, which features Jonathan Davis from KoRN.  The album is currently Number 1 on the Hard Rock charts and an impressive number 27 on the Billboard 200. 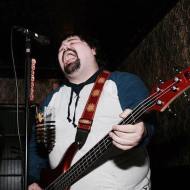