“HLV comes from the idea that actions, not super powers, define a hero or villain. Life is full of gray areas and we constantly have to make decisions not knowing what’s in store. Like life, our music is about facing adversity, overcoming, learning from the bad and celebrating success.” -Heroes Like Villains

Heroes Like Villains is a 5-piece pop rock band from my home sweet home of Columbus, Ohio. The band released their new album, Bad Vs Evil, on August 31st, 2018.

The album is available now on Apple Music, Google Play, Spotify or you can buy physical copies on their website.

Here’s my interview with with Heroes Like Villains’ vocalist, David Butler:

ST: How did Heroes Like Villains come together and get its start?
DB: The current lineup has been together for around 3 years. We found each other through internet groups on Facebook. Except I think we found Ryan, our bassist on Craigslist haha

ST: What/who were major influences for Bad Vs. Evil?
DB: With this album, we definitely moved in more of a pop direction. So you may hear touches of Maroon 5, The 1975, and some of Childish Gambino’s more poppy songs. A big influence for me was the album Whisper War by The Cab. I used to work at Hollister in high school and that album played there, at decibels higher than most live shows, nonstop for like six months straight. I’ve always wanted to do a slightly heavier version of that, and I think we pulled it off pretty well.

ST: Tell us about your next show and why we should be there?
DB: Our next show is Friday, September 7th at Woodlands Tavern in Grandview. It will be your first chance to sing along to the brand new songs off of Bad vs Evil, and pick up a bunch of new merch we just got in. The other bands we’re playing with are great too, so it’s going to be a night to remember.

ST: What other bands exist in your local music scene that Spinning Thoughts listeners/readers should know about and support?
DB: That’s a tough one, there are so many. To name a few, Absolute Hero, We Are The Movies, A Decade Apart, Yesterday Kids, Tourist Trap, Undergrads, and Something Else are all awesome. And they all sound completely different, so you’re sure to find something you will like. It’s been a really exciting year for the Columbus scene, pretty much all of our friends have come out with new music on iTunes and Spotify.

ST: Favorite memories from the studio?
DB: My favorite part of the studio is finally hearing a song that you’ve been imagining in your head, out loud. Every time I hear one of our tracks for the first time there’s always a moment where I think “wow, I’m in a real band.” haha I can’t really think of anything crazy that happened. It being our first full length, I think we were all really focused on making it the best album we could. Least favorite part had to be everyone trying to stay alive in the dead of winter. Josh, our rhythm guitarist, had a stomach virus and almost took all of us out. Luckily, he healed up and everyone else stayed healthy.

ST: Personal favorite track(s) from the album?
DB: I think “Just In Time” is my favorite “anytime” jam. I’m pretty much always in the mood to hear it. On most songs, I write the lyrics and vocals after the instrumentals are done. But on “Next Time, Estimate Me”, I wrote the song structure and sort of the skeleton for the guitar work as well. I think it’s one of the most well-written songs I’ve ever written, and my bandmates made it way better than I could’ve by myself. The album is a concept album though, so every song has its place.

Heroes Like Villains will be doing a Bad Vs Evil Release Party at Woodland Tavern on September 7th, 2018! 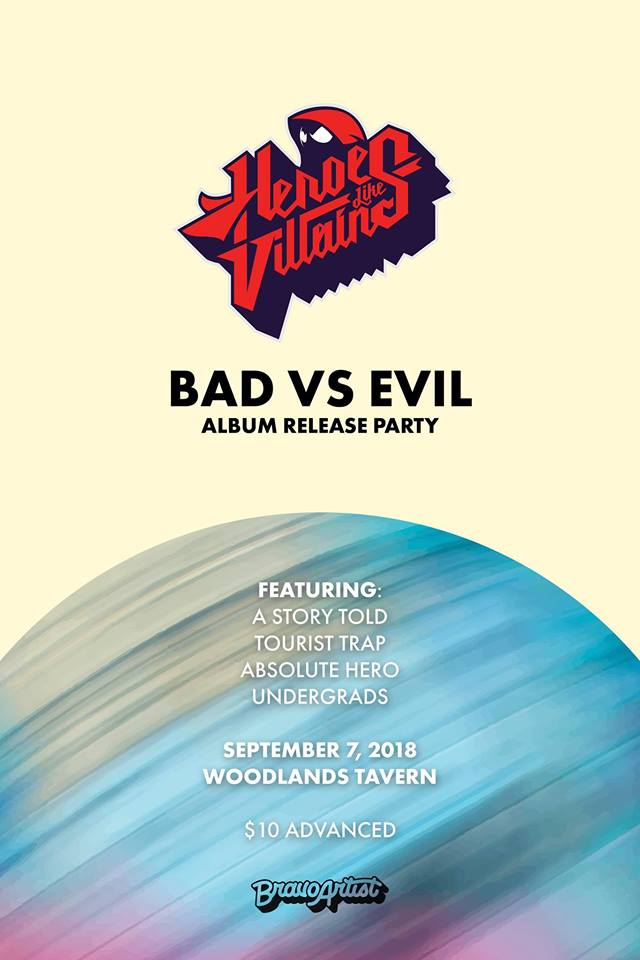 It’s on my bucket list for 2018 to be more active in the local scene, so I was excited to be suggested this release by a friend. Have you listened to the new album Bad vs Evil from Heroes Like Villains? Let us know on Twitter: @SpinThoughts