Let’s face it: Fall Out Boy is definitely one of the most successful bands in rock music. With Top-40 radio stations blasting the same pop/dance tracks every hour, it’s refreshing to hear both older and newer FOB songs in rotation – after all, they’ve done their part to Save Rock and Roll by allowing their sound to evolve over the years. 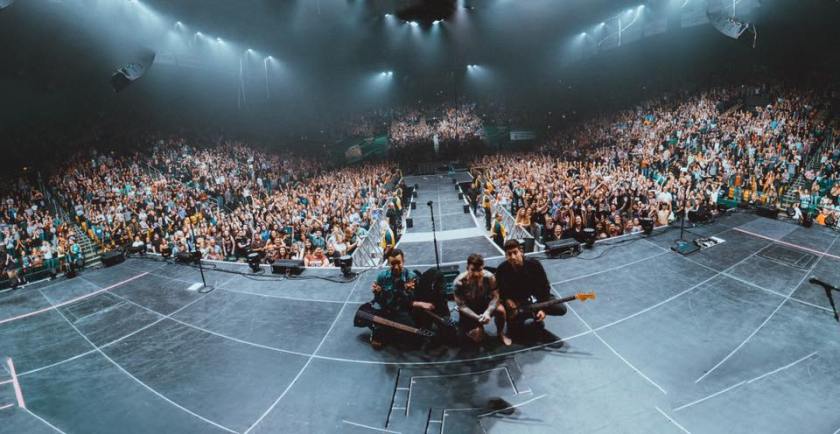 I attended Fall Out Boy’s concert in Atlanta this past weekend and was blown away by their live show. As a performer myself, I love going to concerts because I always learn so much about what it takes to play a great gig. A great gig connects everyone in the crowd together, no matter how diverse the crowd is. This is what is so special about music, and this is exactly what Fall Out Boy did.

Here are some things I learned from the show:

1. You Don’t Need Gimmicks to Put on an Entertaining Performance – Fall Out Boy incorporates a great deal of pyrotechnics in their live show, but I don’t consider this a gimmick. Gimmicks can be overdone costumes, storylines, dancing, or anything that takes attention away from the music. The truth is, as a successful performer, gimmicks aren’t necessary, and only inhibit the connection between the audience and your band. What makes a great show is if you interact with the crowd and leave all of your energy on the stage. Some of my favorite concerts were the simplest production-wise.

2. Play with Precision – You heard me. Play your songs the best that you can, no matter if you’re playing to two people or two thousand people! You want your band to sound the best it can, so your fans can respond most positively to your original songs. Fall Out Boy was extremely tight, and you could tell they’ve had a great deal of practice before touring. Not to mention, Patrick Stump’s voice sounded incredible live. I highly suggest that singers stay healthy, drink plenty of water, and go through their vocal exercises before playing a show, or else they could severely damage their vocal cords in the long run. Trust me, Stump takes care of his voice and it is worth it!

3. Play for the Crowd, not for Yourself – This may seem obvious but it can be difficult sometimes. It’s clear that FOB is playing shows for their fans. Towards the end of the gig, Pete Wentz even thanked the crowd for waiting so patiently on the full MAN I A album, which was delayed due to new changes that the band wanted to make in order to create the perfect album for their supporters. In contrast, many bands perform as if there is a bubble enclosing the stage, and that’s never engaging. Some bands only want to perform to receive the perks of fame and thus, only connect with each other’s egos. Being a live musician means that you have to give your whole self to the performance without anything getting in the way.

4. Write a Great Catalog of Songs – I knew every song that FOB played during their two hour set, and their repertoire of hit songs is unlike many others. From “Saturday,” to “Sugar We’re Going Down,” to “I Don’t Care” and “Champion,” Wentz and Stump are incredibly strong songwriters. Over the years, they’ve maintained their unique voice while creating catchy hooks and riffs at the very same time. So take them as an example, and write as many songs as you can – the more you write, the better writer you will become. It’s also important to pick your best songs for your setlists. Audiences who don’t know your music will be more engaged if your songs are strong, dynamic, and catchy.

5. Be a Team – Being in a band is like being in a sports team (and I know nothing about sports!) It’s about working together for the common good. This is the best advice I can give bands who are hoping to follow in FOB’s footsteps. Work hard and work together – any tension your group may have will show onstage. It is important that you all are having fun and helping each other be the best you can be.

If you incorporate all of these lessons, you’ll become a Champion.