You may think that being a Spinning Thoughts contributor is all about the fame, the money and the recognition.  While you are correct on all accounts, my favorite part will always be the opportunity to hear amazing music before it’s released.  Over the past couple of weeks I’ve had the opportunity to rock out to the new album from Sharptooth, Transitional Forms, dropping this Friday July 10, 2020 via Pure Noise Records.  Overall, this record is hardcore at its finest. 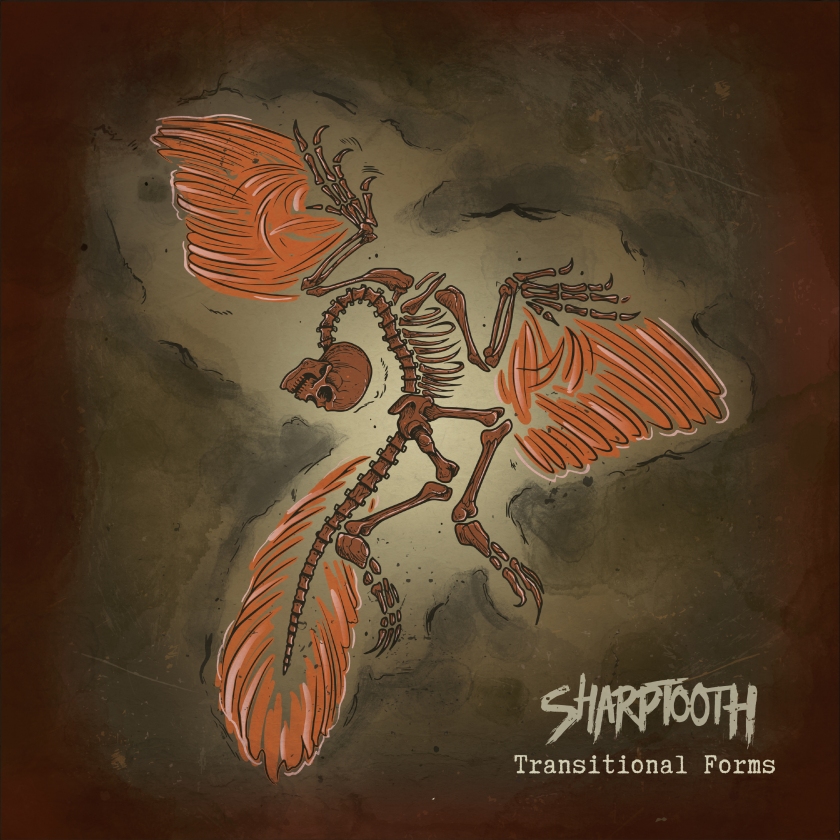 Pre-released single, “Say Nothing (In The Absence of Content)” opens the album and sets it off in relentless fashion.  This track punches you in the gut in the best way, right out of the gate.  It has a brutal verse, which is just an amazing drum line, with screaming laid hauntingly overtop, and an aggressive riff that is nothing to scoff at.  The lyrics are incredible as well, at one point in the breakdown poking fun at the stereotypical slowdown and the fact the lyrics could essentially be whatever and it wouldn’t mean anything different.

“Mean Brain” is non-stop fury.  There is an intricate back and forth with the lead riff on guitar and bass that is only overshadowed by the full band syncopation (including vocals) in the first verse.  This song pushes forward hard and had me moving the entire time.

“Life On The Razor’s Edge” is a solid transitional piece.  It’s slow and methodical with a haunting guitar riff in the build, adding drums and vocals.  The song is met with a wall of silence in the middle before exploding into a frenzy. This track is a piece of art.  “Hirudinea” had me hooked from the beginning and is easily my favorite track on the album.  The lead line here is massive.  The stops and use of silence are so heavy, and when the riff comes back in the second half over the elongated screams it is nothing short of mesmerizing.  “The Gray” is another absolute banger from the start.  The pace is intense and offers one explosion after another without relent.

“Evolution” has an underground punk feel while remaining heavy as hell.  The chanting and the back and forth in the lyrics really grabbed my attention.  The album has a certain level of angst and intensity, but something about this track embodied that to me more than the rest. “153” is different than anything else on the album.  There is spoken word and an element of clean vocals (or as clean as you would expect).  The opening guitar riff is amazing, and it has a heavy, but upbeat feel that is incredibly catchy.  “The Southern Strategy” is loaded with star power and the constant tempo and key changes stand out. The song is all over the place but is tied together at the same time with precise transitions, including an over-the-top bass display that steals the show for me.

“M.P.D.B. (Manic Pixie Dream Bitch)” has such an engaging riff.  From the very onset I knew it was going to be intense, and it delivered.  Sharptooth has a gift for timing as a band, and that is on display here.  It’s so difficult to pull off the timing and transitions in a live show and I’m excited to see them deliver when the world gets back to rocking out on stage and in the pit.  The album closes out with “Nevertheless (She Persisted).”  The song starts off with a strong build to the entrance of the vocals.  When the vocals hit everything else drops for a few lines, but when the band comes back, it is one of the most wide open walls of sound I have ever heard.  This track is an epic way to end an album, to say the least!

Sharptooth has been on my radar for some time now. I was anticipating Transitional Forms to be a big one, and the band did not disappoint.  With everything going on in the world, you owe it to yourself to take the time and give this one a spin to let your frustrations out.  It’s loud, intense, in your face and I wouldn’t have it any other way.