Our very own Jessi McKee got the chance to catch up with Mascots for an exclusive interview:

ST: Tell us a little bit about the title selection of the new Album Butterfly Effect. Does this reflect the inability to change the past, the butterflies of new attraction or something else altogether?

Chase: The story behind ‘Butterfly Effect’ for us has to do a lot with the little things that tend to add up and change our lives in a big way, for better or worse. Knowing that if we could change one event in the past, we may not be in the situations we ended up in.

ST: The band has a new vocalist on this album: Lets introduce him to the world! How did Chris end up with Mascots and how did he help take Butterfly Effect to the next level?

Chase: Yes! Losing a member of your band is never a great experience but finding Chris was a miracle after our last vocalist departed. Luckily enough he was the first, and only, person to try out! Honestly, we were kind of skeptical since he was a heavy vocalist in a metal project at the time, but we quickly learned that he was going to be an excellent addition to Mascots. His writing style and vocal range have given us new ways to produce songs like you’ve heard on Butterfly Effect and you can expect to hear even more of that creativity in the near future!

ST: As for the rest of the band, how did you meet and form Mascots?

Alex: So that is kind of a long story. The two original members left in the band are Chase and I. We started the band back in 2014, writing our EP called Nothing to Lose and then started playing shows at the very beginning of 2016. Over the years we’ve had numerous departures of band members, but we are very happy to have Chris as our new singer and Brandon as our new guitarist, even though they’ve been with us for over a year now.  We’re a family for sure.

ST: “All I Know” off The Good In Me and “If I Die Today” off Butterfly Effect are such great songs about love. Were they inspired by the same person, different people or is it merely an idea and not from a specific relationship?

Chase: You’re definitely on the right track! They were both inspired by different failed relationships from separate members of the band that were unfortunately more one-sided and left us feeling lost when they were over.

ST: “Novelty” has a cool intro, leading into incredibly relatable and heartbreaking lyrics.  Is your creativity inspired more naturally out of sadness, anger or happiness?

Chris: This is a good question, because no matter who you ask there will always be a different answer on where their inspiration and creativity comes from. For me personally, my creativity comes more naturally through sadness. When I get caught in a sad state of mind, my thoughts start running in every direction. There is no stopping it until I get everything off of my chest. So naturally as a singer/songwriter I write down how I feel at the moment, and eventually turn my experiences into song form.

ST: You recorded The Good In Me, Time To Time and Butterfly Effect at Always Be Genius Recording Studio with Seth Henderson and Zech Pluister. Was the writing and recording experience the same for Butterfly Effect as your previous EP’s?

Justin: The recording process is pretty much the same, we generally start with an idea from someone, whether it’s myself or another bandmate. Sometimes they can start as even a vocal idea and we’ll run with it. After practicing the song a bit, we will add or take out some parts to make it sound great.

Recording ‘Butterfly Effect’ was a little more in-depth than the rest of our EP’s. We’ve gotten to really know Seth, and vise versa, which allowed us to produce a great album and allowed Seth to push our boundaries creatively on our instruments. ‘Butterfly Effect’ was an interesting album to create, we spent a lot of time tracking and getting it near perfect. Seth is always great about connecting with the artist and getting the feel of the songs.

As an added fun fact, the self-titled track “Butterfly Effect” was written days before going into the studio, and it turned out to be a killer track on the album!

ST: What is your favorite song of your entire discography to play live and why?

Brandon: My favorite song to play live is “Perspective”. It’s a fun song to jam to and brings a lot of energy.

ST: What were you doing at the moment you found out you would be playing Warped Tour 2017?

Alex: So I was actually sitting down at my work, which is a small office, constantly checking my phone to see if we had been chosen because they were starting to announce the bands for who would be playing each date. I got an email saying that we were chosen to play Warped Tour and I literally jumped up out of my chair. It was a very sweet moment of joy and relief that I could not stop telling people about because I was so excited to be playing the main stage in our home city of Cincinnati.

Alex: My favorite part of Warped Tour in 2017 was not just playing the main stage alongside bands like Neck Deep or Hands Like Houses, but it was when we got off the stage and so many new people, new faces were excited to meet us. Warped Tour was definitely the best event for people of any age to find new music to listen to. It was a huge part of everyone in this band’s life and there will never really be anything like it for this music scene.

Alex: There are a ton of very talented bands from Ohio, far too many to name. But we’d like to definitely give a shout out to our good friends in a band called Elbow Room out of Cleveland, Ohio. Their latest EP, Constant Mistake, is a very good EP that we as a band jam to all the time.

ST: Can we expect a tour coming from Mascots soon?

ST: Anything else we should know?

Alex: Please give our newest EP, ‘Butterfly Effect,’ a piece of your time. We worked very hard to create these songs and we couldn’t be more proud of them. 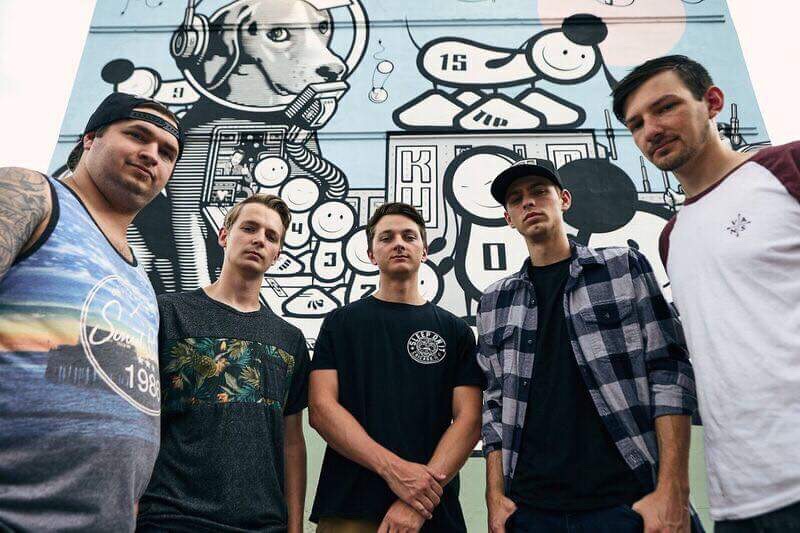