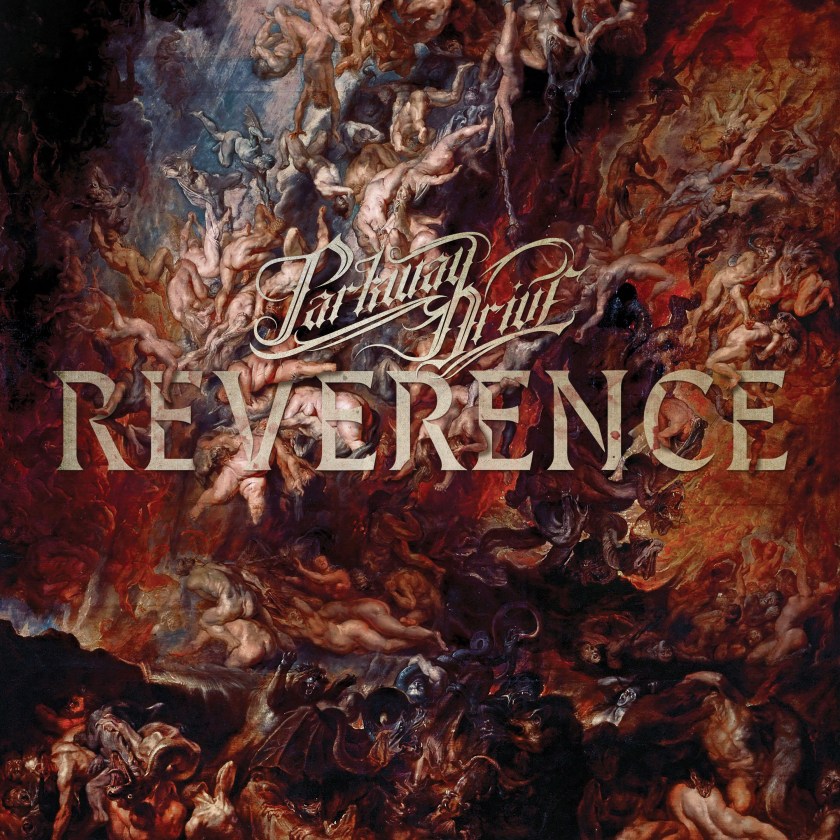 Unless you have been living under a rock (or by some chance don’t listen to metal and find me witty, so you read Metal Thoughts anyways — thanks!) Australian metal band Parkway Drive released a new album last month, on May 4th.  Normally, I do everything I can to review albums in a timely manner and if I don’t have time to get to it while it is relevant, it gets pushed aside.  This album is different though, because in my opinion, it is likely to be the best metal album of 2018.  Now that I have that bold statement out of the way, let me tell you why.

Parkway Drive has been gaining popularity lately, and it is no secret why.  The Australian metal band has it all — hard and heavy music, awesome stage shows, and rock star personalities.   Their stage show is second to none — these guys rock hard and whether they are in front of a small crowd or on the main stage at Rock on the Range, they bring a heavy energy every single time.

Winston McCall, the lead singer of the metal juggernaut, is an avid thrill seeker.  His antics have been well documented, such as allegedly wrestling a bear, but for the music video for “The Void” he actually set himself on fire.  No stunt double, no visual tricks or CG.  In addition, this guy is as intelligent as they come.  If you listen to him in an interview, he is sharp and well spoken.  That is incredibly evident in his lyrics, which are typically relevant and meaningful.

Reverence is a signified growth for the band.  McCall was quoted as saying the band has “outgrown metalcore”.  The album is deeper, heavier, and more pointed than anything before it, but still stays true to the sound that Parkway Drive fans have grown to love.  The first track on the album “Wishing Wells” is a slow build, melodic if not slightly creepy tune, that builds to a heavy, in your face, metal anthem.  It is a very fitting introduction the album.

Conversely, the album winds down to another track with a similar, haunting melody.  “The Colour of Leaving” is a chilling song to end the album.  It starts slow and quiet, with a guitar line similar to the one found to open the album.  The song deconstructs slowly until it is just spoken work from Winston until the album ends exactly as it started, with the sound of a recorder and the caw of crows.  Talk about artistic!  In that vein, the album has some really artistic, different songs as well.  “Cemetery Bloom” is a mostly percussion-less, synth led song that is led by haunting chants that build into a strong transition to the lead single “The Void”.

The album delivers on so many levels.  Throughout it is hard, heavy, and gritty.  True to the history of the band, the songs are meaningful and deep.  The lead single “The Void” has a very catchy guitar riff to lead in and is highlighted by one of the most engaging chorus lines on the albums.  The song is about the disconnect in our society caused by social media and the need to have a virtual presence stronger than your actual self.  The albums other single “Prey” is upbeat and has a really cool approach to the verse where the guitars focus on harmonics, leaving the drums to do the driving and heavy lifting.   With the theme of meaningful songs, it is meant to highlight how everyone is prey to something, and there is always a hunter.  My favorite song on the album is “Absolute Power”.  It has a driving bass line and a dark, heavy feel.

I said it once and I will say it again, Reverence has a very high likelihood to land at number 1 on the year end list from Metal Thoughts.  I haven’t been this engaged by an album in years.  From cover to cover, it is heavy and engaging.  If you haven’t given it a listen, do it today.  There’s no better way to spend 43 minutes!