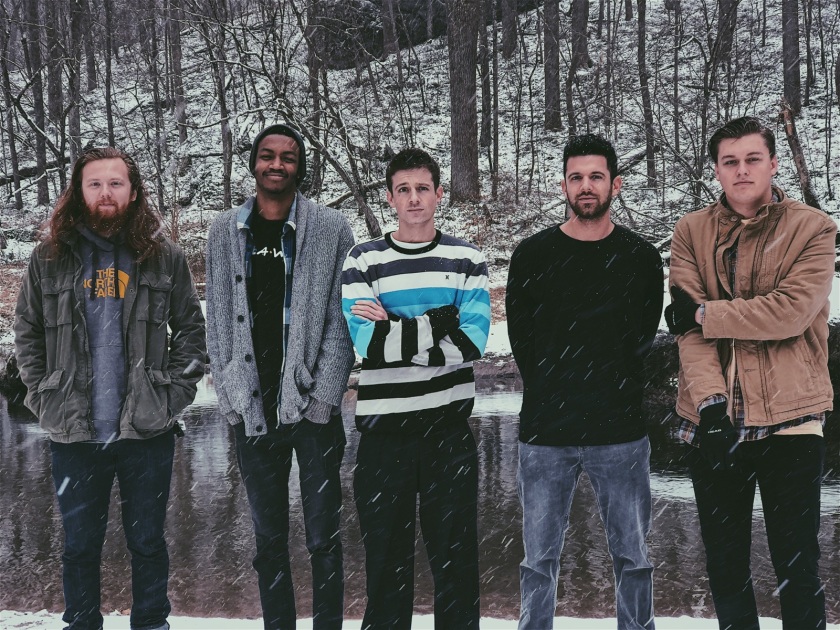 At Face Value, the five-piece pop punk outfit from Baltimore, Maryland is due to drop their new EP Ivy & Echo March 16.

This six-track collection of music takes you on a diverse musical journey featuring songs like “Cinderella” that push intricate guitar work and “Overcast”, an acoustic song snuggled right in the middle of the EP. There’s an energy and power living within these songs that can be felt each time you listen.

We had an opportunity to talk to the band leading up to the EP release:

ST: On March 16, At Face Value is dropping its upcoming EP Ivy & Echo. What is the overall feeling heading into this release?
Grayson: Sweaty Palms…. just kidding. I would say we’re feeling really excited to get this music out for people to hear. The excitement is practically oozing out of us. We have been preparing since Fall 2016 and between writing, recording outside of Chicago, shooting music videos, recording more, and buying new merchandise, it’s been a hell of a ride! Once this EP drops, all the sweat, stress, champagne, and tears will have been worth it.

ST: The band worked with Seth Henderson on Ivy & Echo. Henderson has worked on albums from Real Friends and Knuckle Puck, to name a few. What was this experience like?
Jeremiah: Working with Seth was awesome! We went in with a good portion of each song written but he helped us figure out little things that really make the songs pop. We have always loved the guitar tones he brings to the table and wanted to try and capture the same badass, in-your-face tones we are always banging our heads to. He helped us figure out some leads for a few tracks and wrote what we like to call “ear candy” for a few parts. He gave us great ideas for bass, drum fills, harmonies, and even some structure changes to our last track on the album, “Return The Slab”, which he also even hopped in the studio and banged out a little bit of harmonies for. Seth was awesome to work with and we’re very satisfied with the touches he put on our songs. It was one of our favorite recording experiences!

ST: The band released an official music video for “Cinderella” on February 1. Why did the band choose this track as the first video off Ivy & Echo?
Parker: “Cindy” was one of the first songs that we wrote for this EP. We were really confident about it and thought that it would be a great song to introduce our new set of jams with. The song has a lot of energy and just keeps going, it makes you want to keep listening all the way until the end. We also came up with the idea of a type of Cinderella-story which we thought might interest people, because let’s be honest, who doesn’t love Cinderella?

ST: Who was involved with the music video for “Cinderella” to help bring it to life?
Parker: Well first and foremost, Adis Pleh, or Addy as we call him, was the mastermind behind this video, as well as all of our others. We also got some help from a bunch of our good friends and even my girlfriend to be extras which made for a great time. The location of the video was a parkour gym run by some friends of the band as well, the Sweitzer brothers. One of them is featured in the video as Alec’s sexy lion transformation.

ST: The band had a show on February 23 to celebrate the release of Ivy & Echo. How was it?
Grayson: We played a venue in Baltimore called “Ram’s Head Live”. Many bands we look up to (Yellowcard, Angels & Airwaves, Neck Deep, Knuckle Puck, Motion City Soundtrack, so many more) have set foot on this awesome stage so we were super excited to be playing there for the first time. It was without a doubt the most epic show experience we have had as a band; the stage was huge, the light show was epic, the crowd was wild. We also got to enjoy some perks like having a dressing room, using a walk-out song, and headlining the whole damn thing. Parker brought champagne onstage. We even threw beach balls out into the crowd and they were kicked around for the rest of the set. The excitement I felt before performing was undescribable, I’ve never felt anything like it. I couldn’t have asked for a better release show and I just hope we can continue to play bigger and better ones like this.

ST: The band is setting the tone for a great year so far. What else might we see At Face Value get into in 2018?
Jeremiah: We try our best to keep busy! We have some local shows with some cool out of state acts coming up, we went in the studio again late last year and made up special treats for after the new ep is released, we have new music videos planned for a couple other songs off ‘Ivy & Echo’, and also planning to hit some other states around the east coast! We are always trying to outdo ourselves. Always trying to make our next album, video, and art bigger and better than the last. We can’t wait for everyone to see what we have in store!

ST: What bands are you into right now that others should check out?
Jeremiah: I feel like my taste in music is all over the place at the moment. Three albums that came out recently that I still find myself listening to from beginning to end would be DRMCTHR’s ‘Hold Your Love’, Movements’ ‘Feel Something’, and Tiny Moving Part’s ‘Swell’. I could go on and on about the creativity put into these albums by these amazing musicians but I’ll let you find out for yourself!
Grayson: ‘Swell’ has been awesome for sure. I’ve been jamming Knuckle Puck’s ‘Shapeshifter’ a lot recently and With Confidence.
Parker: I’m always the one stuck in the 2000’s. Lately I’ve been re-listening to ‘The Black Parade’ by My Chemical Romance. The whole album, front to back, will never get old to me!

ST: How can fans best support At Face Value?
Parker: The best way to support any local band is to just be involved and come to shows. Our shows aren’t always at the most convenient of times or locations but we really appreciate everyone who takes time out of their day to come see us. Not only that, but you can always check us out and stay updated with anything we have in the works online. You can find us on all the social medias and band sharing sites so we’re not hard to find! As mentioned before, we have a couple sick videos on YouTube done by our pal, Addy, so go check them out when you get a chance and let us know what you think. We just got a fresh batch of new merch including T’s, long sleeves, and hoodies so you can always grab one from us online or at shows too. We always appreciate feedback as well so if you dig us let us know and if you don’t, well, let us know! (You will though).

Are you going to be getting your hands on Ivy & Echo, the new EP from At Face Value on March 16? What are your thoughts on their video for “Cinderella”? Leave it in the comments down below or hit us up on Twitter: @SpinThoughts!