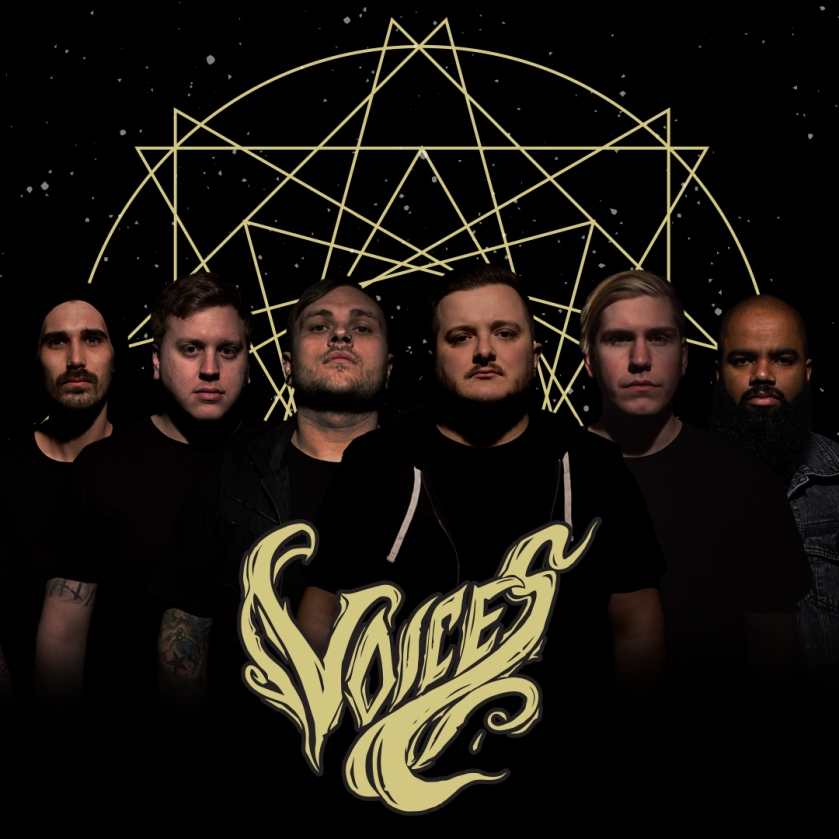 If Metal Thoughts has a New Years Resolution, it would be to spend time discovering new artists that are changing metal. Bands like Of Mice and Men and Nothing More are doing awesome stuff and are moving their way into the spotlight.  But there is something to be said for the unsigned artists — the bands out there putting their heart and souls into the music they love.

Voices is doing just that.  On December 22, 2017 Voices put out their second self-released studio EP, Resurgence. Voices is a band that is certainly starting to catch some momentum, playing with bands like We Came As Romans and Miss May I.  Voices is a 6-piece band based out of Indianapolis that features two vocalists and a unique melodic sound.

The opening track, “Demons”, is a heavy song with a driving momentum that gets the album started on the right foot and truly sets the tone. This is definitely “single” worthy and I wouldn’t be surprised to see it on hard rock radio in the future.

One of the things that stands out about the album is the unique transitions between melodic riffs and clean vocals that fade into heavy driving choruses with unclean vocals and distortion. The best example may be “Nightmare”, which is my favorite track on the album. Metal is known for harmonies in guitar solos with that cool dissonance, but it is rare to get the level of vocal harmony this album contains. “Haze” has some solid harmonic clean vocals, and actually takes it a step further with dual unclean vocal harmony.

In the spirit of Spinning Thoughts’ commitment to discovering new artists, we took a few minutes to get to know Voices and give you the chance to connect with this up-and-coming band.

ST: You guys have such a unique sound, unlike anything in metal today. Who are your influences?
V: A lot of our influences are all over the place. We like almost everything but metal has our hearts. So we like to translate what we like personally into a metal song.

ST: Writing music is a lot of work. With a 6-piece band that has several vocalists and guys playing the same instrument, what is your process like?
V: Chemistry is everything to a band writing a record. A lot of it is getting a vibe off of one another then going from there. We all have a lot of opinions but we also know what we want and where we need to go.

ST: As hard as it is to release a successful album with a studio, you guys are doing it on your own. What kinds of challenges did you face with putting out this album?
V: A lot of it for us at the moment is getting momentum behind us. Since we are currently independent, it’s hard to get good PR or people who want to actually help us. For this record though we have been very fortunate that Austin Griswold (Secret Service Publicity) has been such an amazing Publicist. He really has been doing so great at pushing our record for us.

ST: You’ve toured with some cool bands. Who is your favorite band to share the stage with? Are there any bands you’d like to hit the road with? What are your favorite cities to play?
V: We are still a pretty fresh band so touring has been slim but I have to say, We Came As Romans, has by far been my favorite show we have played. The guys in that band are so kind and hospitable. I would definitely hit the road with them or really any band at this point. We just want to get out there and spread our music. Currently Indy has been my personal favorite place play since it’s our home town! We hope to make 2018 a year of playing all over the country.

ST: What does the Spinning Thoughts audience need to know about Voices?
V: We are a band that values our fans. We love to make music with a purpose, in hopes to help someone in need. We hope your audience can find solace in our music. We would like to also thank you guys for this awesome interview. It means a lot that you guys support us.

Whag are your thoughts on Voices and their latest EP Resurgence? Leave it in the comments down below or hit us up on Twitter: @SpinThoughts!

TAGS: Of Mice and Men | Nothing More | Voices