Black Veil Brides is one of those bands that drive (metal) fans crazy.  The band has had some mainstream success, they utilize a high level of glam and showmanship, and they use mainly clean vocals.  Andy Biersack has an incredible voice and a lot of their songs are catchy and sing-songy.  They are far too mainstream to be considered metal.

On the other hand, the band uses a lot of extended guitar solos, driving bass lines, heavy distortion, and syncopated double bass.  If you take out the more glamorous elements of their sound, and just listen to the music, it is hard to argue against the heavy nature.  The lyrics are raw; they are often dark and with a heavy purpose.  Sounds pretty metal to me.

Black Veil Brides released their fifth studio album, Vale, this past Friday.  Regardless of your opinion on their genre, this album is one of the most anticipated early releases of 2018, and for good reason.  There is a little bit of something for everyone on this album.  From the onset, the first single “The Last One” offers a sing-along anthem that utilizes a heavy, driving riff to push forward.  In fact, there are several songs on the album that feel like they belong on hard rock/metal radio.  “Wake Up” is my favorite track on the album and showcases a very cool group vocal/chant to kick the song off which leads to a heavy, yet catchy hook that is sure to get stuck in your head.  Though the song is upbeat and entertaining, the background music is heavy and is highlighted by an intense guitar solo that channels the aurora of Avenged Sevenfold.

The album offers several more heavy tracks that are likey to emerge as singles, such as “My Vow” and “The Outsider”.  There are also some interesting concepts on the album.  The eight minute epic “Dead Man Walking (Overture II)” has a really solid slow build from a slow, melodic song with a catchy hook that evolves into a heavy, driving guitar solo and bridge before letting back up for the final hook.  The album ends with a ballad, “Vale (This Is Where It Ends)” that also has a solid build to a slow, but heavy and fitting end to the record.

If you can forget the labels, forget trying to put this music into a box and let it speak for itself, this is an entertaining album from a band that is unique, artistic, and innovative.  They have managed to take a heavy sound and add a glam rock/arena anthem feel without coming across as generic.  When you break it down, Black Veil Brides is the type of band that metal needs right now.  The mainstream attention that Black Veil Brides is receiving may be a doorway to shining a positive light on hard rock and metal and shining more light on the emerging artists that have a heavier sound.

Make sure you get out to see Black Veil Brides on the American run of “The Resurrection Tour” now through March 2 with Asking Alexandria. 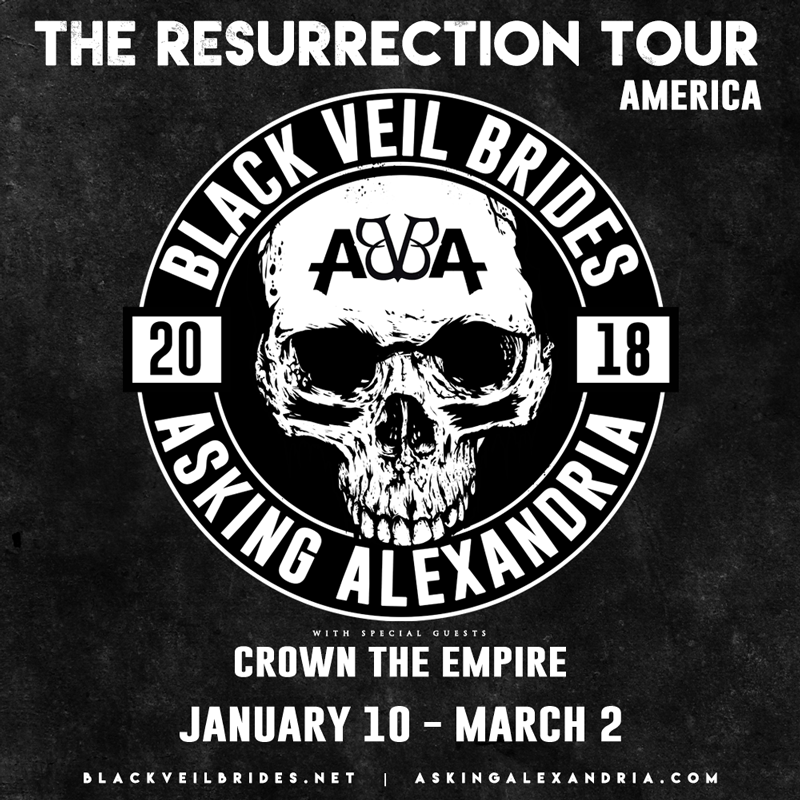 What are your thoughts on the latest album from Black Veil Brides? Are you going to see them on tour this winter with Asking Alexandria or already have? Leave it in the comments down below or hit us up on Twitter: @SpinThoughts!