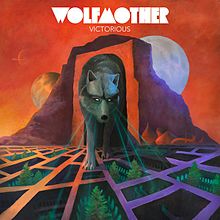 Formed in 2000, in Sydney Australia, Wolfmother set out to create a sound that would take listeners back to the beloved hard rock of the 1970s, while maintaining a modern creativity. The band has done just that and continues to do that today.

When their first charting single, Woman, was released on June 17th, 2006, I heard the greatest description of the 3-piece rock monsters. The description was this; “If Black Sabbath and Zeppelin came together and had a love child, Wolfmother would be that child”. The Single was recorded for their self-titled, debut album, and peaked at number 7 on the Billboard Hot Mainstream Rock chart. This heavy, nostalgic rock sound produced by Wolfmother has not slowed down, and is ever apparent on their fourth studio album, Victorious, that was released on February 19th, 2016. In our first episode, Music with a Purpose¸ we discuss the title track from the album.

The band has gone through some lineup changes over the years, but what has remained constant is the powerful, intricate, ear bleeding guitar and incredibly distinct vocals of Andrew Stockdale. With an undeniable voice reminiscent of that of Robert Plant, Axl Rose, and any of the vocalists of Uriah Heep over the years, you are sure to feel at home when listening to this album.

Victorious does not have a track that I could honestly say I don’t dig, but there a few that stand out to me. The first being the title track, Victorious. The guitar riffs are incredibly intricate and heavy. Added to the high vocal range of the song, this song is deserving of the title. As tough as it is to pick a favorite track, I’d have to say that my favorite is the 5thtrack on the album, City Lights. The lead guitar in this tune is incredible. The chorus is catchy and of course, Stockdale’s voice is unmatched. And lastly, as you heard in Music with a Purpose, the last song we will touch on is Best of a Bad Situation. This track is not quite as heavy as many of the others, but this in no way means the song does not absolutely kick ass. This song grooves in way that tickles your ears and as always, those vocals make the hair on your neck stand up.

If you have never heard of Wolfmother, or even if you have and you haven’t listen to Victorious, you need to. Like, Now! Otherwise, you are depriving yourself of hearing one the current bands in the world that are keeping rock alive. Seriously, the album is incredible and so is Wolfmother.